THE GAME AND THE RULES: ENGLISH

B4B - BASEBALL played by BLIND - Brief description of the game

The defensive field of play is the area of left field beyond the separation rope between the second defensive base and the third base foul line.
The offensive bases correspond to the ones used in normal baseball.
First base is sound activated, second base is the first batter’s goal, third base and home base can be reached by runners following a hit made by one of their teammates.
Home plate, for the runner, is an imaginary line of 13 feet positioned on the home base-first base alignment.
The center of this line corresponds to the home plate vertex.
The homerun line is marked at 220 feet from home plate.
The defensive second base is 13 feet towards the left field from the original second base.

The adaptive blind baseball is a hard rubber ball that contains six holes with two nickel-plated brass bells inside which help blind players hear the ball.
The batter who is blind puts the ball in play by tossing it in the air and hitting it. (The ball is not pitched to the batter it is held by the batter).
In order for the batted ball to be ruled “IN PLAY”, it must travel through the infield bouncing at least once before the rope which is positioned between the second defensive base and the third base foul line.
The batter-runner attempts to reach second base either by touching or going around first base and she/he is ruled safe if she/he arrives before the sighted defensive player, positioned on the second base, catches the throw from the blind defensive player.
The batter is allowed three swings and if the she/he does not put the ball in play or fails to hit it on the final swing, it is a strike out.
The runner on second base advances to third base and home plate on successive batted balls.
Runners can leave the base only after the umpire has called the batted ball “FAIR” and this occurs when the ball, properly batted, surpasses the rope.
Upon arrival at either second or third base, the runner must touch the base. She/he does not have to maintain contact with the base.
Any runner on base can try to steal an “extra base” only after the blind fielder has thrown the ball past the sighted assistant.
The time spent by the sighted assistant in order to retrieve the ball and return to the base corresponds to the time runners have to steal the “extra base”. Runners steal at own risk.
A run is scored when the runner crosses the imaginary home plate line (13 feet). The center of this line corresponds to the home plate vertex and it is lined up to the first base foul line, going both sides of home plate.
A homerun is scored when the ball, batted in fair territory, travels beyond 220 feet.
The sighted defensive player may field a ball hit toward him/her, as long as she/he maintains contact with the second defensive base. The batter, in this case, is ruled out. The ball is ruled dead. If there are other runners on base at the time, they must return to their respective bases before the play can resume.
Runners at second base, third base, and the batter-runner are considered out when the sighted player (positioned at second base) firmly catches the batted ball retrieved and thrown to him by the blind defensive players prior to any runner reaching the base. In this case the defense with one throw can make one or two or even three put outs in one go.
If a ball batted in fair territory goes over the line between second base and third base on a FLY, the batter is automatically declared “OUT” for safety reasons and the ball is ruled dead. (This is called FLY OUT). If there are other runners on base at the time, they must return to their respective bases and game will resume with the next batter.
Games are normally played in 7/9 innings.

To enlarge the image of the field click on the drawing 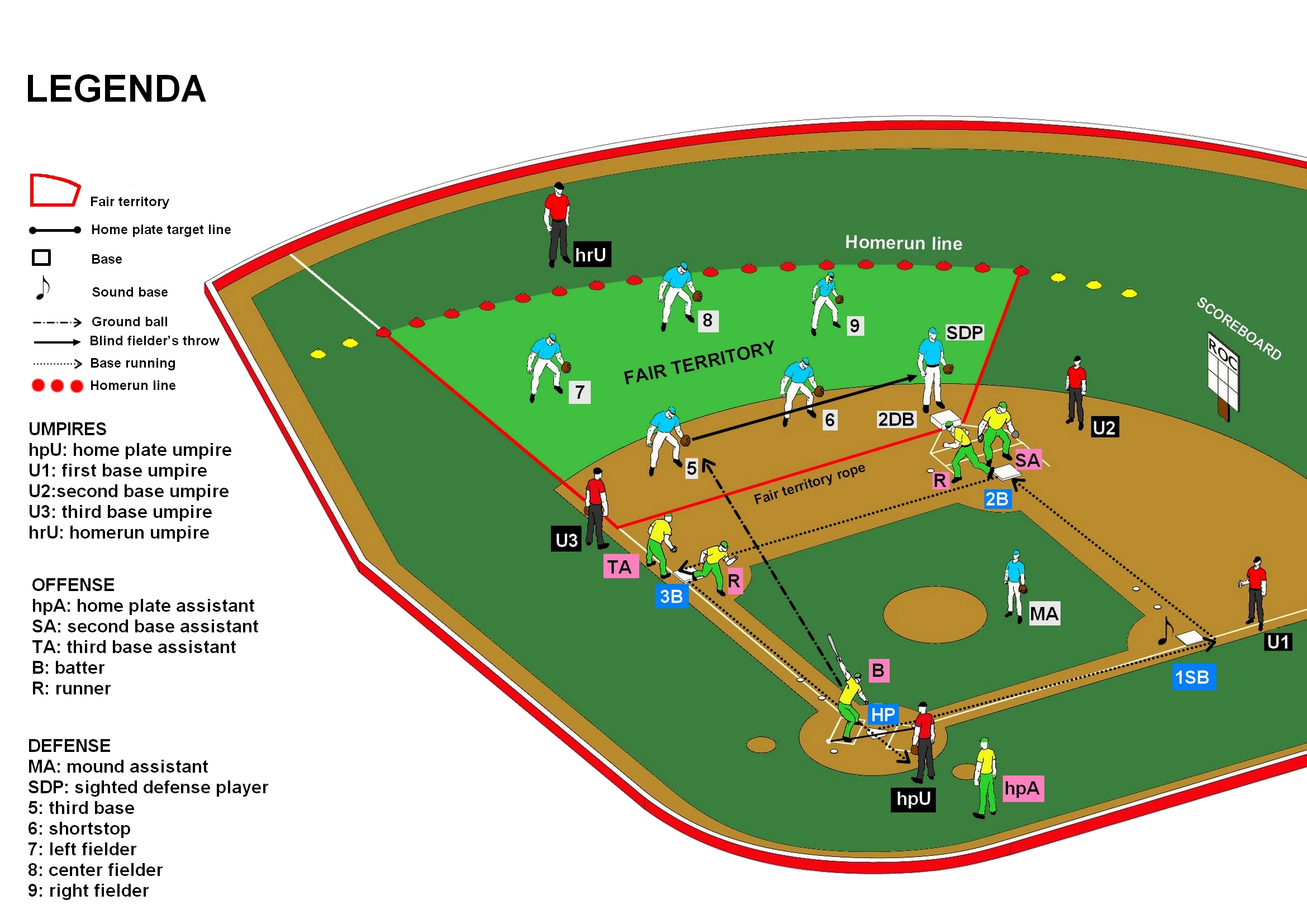